Capsule Summary: It’s payday at the 4077th and paymaster Hawkeye winds up with $3,000 that the Army wants back. Meanwhile, Trapper finds himself in a losing streak at the poker table.

This is a great episode with a lot going on. The A storyline involves Hawkeye as paymaster getting $3,000 from the Army after making an off-hand remark to Radar. He doesn’t want the money but Radar won’t take it back, so he gives it to Father Mulcahy. Not surprisingly, the Army wants the money back.

Captain Sloan, Supervising Acc-Fin (played to perfection by Eldon Quick) is sent to get the money back. Sloan previously appeared in Season Two’s “The Incubator” and Quick would play a similar character in Season Four’s “The Late Captain Pierce.”

The B storyline could be either Trapper’s run of bad luck at the poker table or Frank’s purchase of two sets of pearls, one real and one fake, to give to his wife and Margaret, respectively. Both probably get about the same amount of screen time. Of the two, Frank’s storyline is by far the more amusing, as Margaret shrewdly tricks him into giving her the real set of pearls. I do like Trapper begging Hawkeye for some money (“What about all our knee-scraping, commode-hugging good times?”). 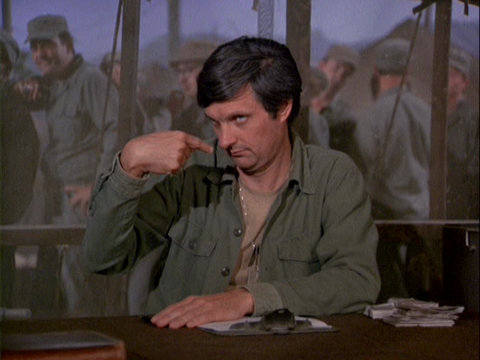 Jack Soo made his second and last appearance in this episode, having previously guest starred in “To Market, To Market” as an entirely different character. Too bad he didn’t appear in additional episodes. Both his characters are terrific.

Frank tells Klinger to “stand a little closer to the razor when you shave.” He said almost exactly the same thing in “Dear Dad,” telling Hawkeye to shave again and “this time take one step close to the razor.” I wouldn’t exactly call it a repeated joke. I only noticed the similarities because I watched the episodes back-to-back while preparing to review them.

Hawkeye refers to Trapper as “Ravenal,” which I had to look up to learn is a reference to compulsive gambler Gaylord Ravenal from the novel Show Boat.