This is a wonderful episode and one that needs to be watched carefully and closely to catch all of the little things going on in the background, like Radar carrying around jeep parts and P.A. announcements that are more amusing then usual. There’s also a jarring sequence in which Klinger tries to blow up Frank with a grenade, which feels out of place yet bizarrely fitting.

It’s tough to pick a highlight of this episode but for me it would have to be Trapper’s question to Colonel Blake during the sex lecture:

Trapper: “Uh, sir. What happens in the event that Figure A is attracted to Figure B and wants to get married, but Figure A is already married to, say, Figure C, and Figure B is engaged to Figure D? But Figure A can’t keep his hands off of Figure B because she’s got such a great figure.
Henry: “Uh-huh. Well, according to the Army, he’s got to forget her.”
Hawkeye: That figures.

It’s one of my favorite bits of dialogue from the whole series and I would love to know whether Wayne Rogers was able to say it correctly in one take or if it took a few tries.

There are some parts of the episode that aren’t too believable. Klinger, in his second appearance on the series, gets in a fight with a superior officer, punches him out cold and then threatens to blow up the camp priest with a grenade. And yet he suffers no repercussions whatsoever. It’s difficult to reconcile this Klinger with the Klinger who comes up with wacky ideas to try to get out of the Army. Obviously, the character hadn’t really been defined at this point.

Likewise, a doctor being lowered from a helicopter into the middle of a battle to patch up a wounded soldier doesn’t seem realistic. Hawkeye would have made a perfect target ever so slowly descending from above.

The scheming Radar seen in this episode is soon replaced by a more naive Radar who wouldn’t think of trying to ship a jeep home part by part. Larry Gelbart discussed this in a December 2007 post to the alt.tv.mash Newsgroup:

Once l became aware (through research) that some enterprising
serviceman did in fact mail a jeep to his stateside home, one or
several pieces at a time, l knew that we had to have someone do it in
an episode – and who was more enterprising than Radar? After that, it
became a matter of indicating very specifically where in the
episode’s script Radar would be seen carrying a steering wheel or
whatever jeep component or any other designated item and then somehow
paying the whole business off.

I’ve long wondered why this episode has a “roll call” at the end. It was the 13th episode produced (although the 12th aired). Typically, television shows are given 13-episode orders and if they’re successful a network orders a full season. Perhaps the cast was acknowledged at the end of the episode as a sort of celebration that the first block of episodes has been completed. 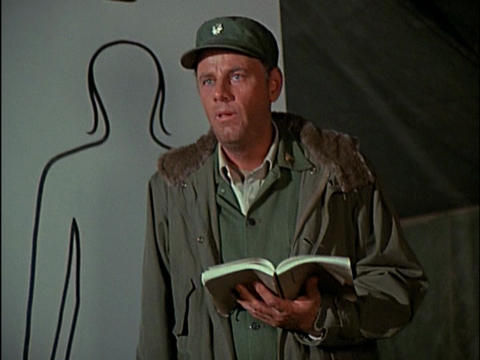 In his letter, Hawkeye states that his father lives in Vermont rather than Maine. He also mentions his mother and sister, despite later episodes revealing he is an only child and his mother was dead. The series is peppered with inconsistencies like these, particularly in early seasons, but they don’t detract from the quality of the episode.

After walking into the Mess Tent and seeing Father Mulchay trimming the Christmas tree with various medical instruments, Hawkeye says “Looking good, Red.” This is a reference to the nickname “Dago Red” used in the original novel and the film MASH but only used twice in the series (the other instance was in the pilot episode).

Lizabeth Deen is credited as playing Becky in this episode. She must be the nurse Hawkeye is planning on meeting at 11 o’clock after his rendezvous with Barbara at 9 o’clock.