Also, AfterMASH had a Christmas Eve episode, aptly titled “All About Christmas Eve” and broadcast during the show’s first season on December 29th, 1983.

Which is your favorite Christmas episode of M*A*S*H? And who do you think made the best Santa Claus: Hawkeye, B.J. or Colonel Potter? 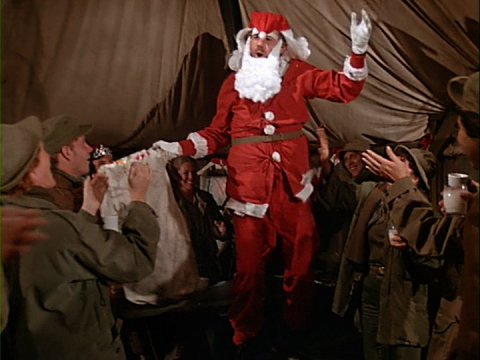 “Death Takes A Holiday” is one of my personal favorite episodes of M*A*S*H. The main storyline involves B.J., Hawkeye and Margaret working furiously to keep a mortally wounded soldier alive through Christmas so his kids won’t have to think of Christmas as the day their father died.

It’s intense episodes but falls apart somewhat when looked at logically (would the soldier’s family really feel any better knowing he died five minutes after Christmas?) but it holds up well overall. What works best is the secondary storyline involving Charles and his family’s Christmas tradition. I’ve always found the line, “It is sadly inappropriate to give dessert to a child who has had no meal,” to be very profound and the scene in which Klinger brings Charles dinner and Charles calls him Max very touching.

So who made the best Santa? I’ve always been torn between Hawkeye and Colonel Potter. Hawkeye’s bushy eyebrows really stick out in my mind but Colonel Potter brings a certain amount of gravitas to the role.