Capsule Summary: Frank has charged Hawkeye with mutiny and various members of the 4077th attend a preliminary hearing.

This episode is a terrific yet disturbing look into the psyche of Frank Burns. His outlook on life can be summed up perfectly by this somewhat famous line of his:

“Unless we each conform, unless we obey orders, unless we follow our leaders blindly, there is no possible way we can remain free.”

And he believes it, too, earnestly and completely. In fact, the episode revolves around Frank’s various convictions: that Hawkeye is a danger to America; that he can reshape the 4077th in six days while in temporary command; that his surgical skills are top notch; that everyone around him is incompetent at best, mutinous at worst.

Frank’s recollection of the surgery that led to the so-called mutiny is brightly lit, bizarre and easily the highlight of the episode. That he thinks highly of his surgical skills was not surprising but the depth and extent of his false memory was unbelievable. Left uncertain is whether Frank actually remembers the surgery that way or if he was simply trying to build himself up while tearing down everyone else. Personally, I’m conflicted. 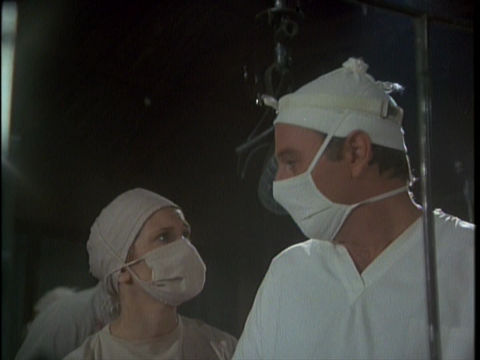 There are a lot of great bits of dialogue in this episode. My favorite is between Frank and Radar about his teddy bear:

I also like Hawkeye’s “Mediocrity’s no crime, Frank!” from Frank’s recollection.

Anachronism alert: Radar’s comic books seen during Frank’s search of his desk are Marvel comics from the 1960s.

During Frank’s recollection of the events of 11 October, notice his voice when he calls out “Nurse Johnson.” It doesn’t match the rest of his dialogue.

The title of the episode refers to the 1952 Pulitzer Prize-winning novel The Caine Mutiny, which was turned into a 1954 movie starring Humphrey Bogart.

Margaret does not appear in this episode.

This was Harry Morgan’s directorial debut.