Capsule Summary: Shelling forces an orphanage to move in with the 4077th temporarily, much to Frank’s disgust.

I enjoyed this episode more for the little moments. The reminder that Colonel Potter and B.J. were new to the 4077th and, in the case of B.J., new to war, was nice. There was a mention of Trapper going stateside and B.J. being fresh out of residency and still shocked by the horrors of war, specifically hearing that orphans lose limbs due to scavenging for brass.

M*A*S*H so rarely attempted any sort of continuity between episodes that it was actually a little surprising to see an episode like this. I will try to keep a closer eye on further episodes from Season Four to see how many other references to Colonel Potter and B.J. being new to Korea there were.

This episode featured another ill-gotten purple heart of Frank’s given to someone more deserving, after the one he received in “Sometimes You Hear The Bullet” that was given away by Hawkeye. I wonder if Frank was able to request replacement medals from the military.

Why wasn’t Frank in surgery immediately? He should have been called to the O.R. the minute wounded arrived. 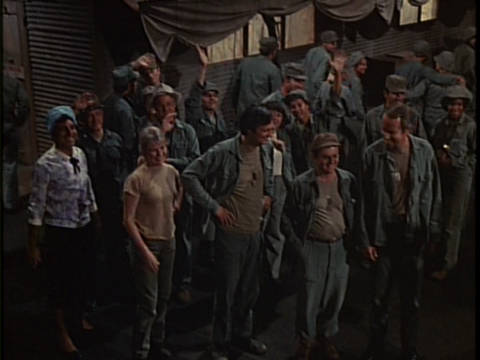 Waving Goodbye to the Orphans

I looked up the term “slicky boy” and learned it refers to South Koreans who stole from the U.S. Army during the Korean War. I don’t recall it being used in any other episodes.

16 Replies to “Episode Spotlight: The Kids”