Capsule Summary: The 4077th’s generator goes out while Radar is on leave and when he returns everyone assumes he’ll be able to scrounge one up. But he can’t and to make matters worse, he learns his Uncle Ed has died, meaning he can get a hardship discharge.

Gary Burghoff’s farewell episodes are tough to watch. Not because the 4077th (and viewers) are saying goodbye to Radar but because the Radar depicted in this episode and “Good-Bye, Radar (Part 2)” is so different than the Radar from earlier seasons.

It wasn’t a case of the character evolving — although certainly Radar did evolve, particularly after Season One. No, it seems obvious that Gary Burghoff was unhappy and burnt out from playing Radar for so many years and for whatever reason allowed that to come through in his portrayal of Radar in these episodes.

According to scriptwriter Ken Levine in an October 2006 blog post, Burghoff refused to wear his iconic jeep cap for these episodes. Levine and his writing partner David Isaacs co-wrote both episodes, which were the last scripts they penned for M*A*S*H.

Burghoff appeared in brief scenes featuring Radar, without his jeep cap, on the telephone in two other Season Eight episodes (“Too Many Cooks” and “Guerilla My Dreams“). Not wearing the cap aged Radar and made it very obvious that Burghoff was playing a character much younger than he was. Which of course was one of the reasons Burghoff gave for wanting to leave the series. 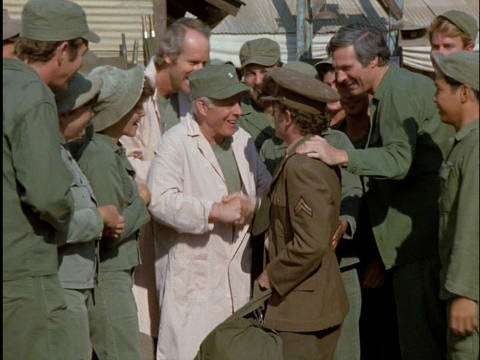 Everyone is happy to see Radar

Radar acting out of character aside, you have to feel bad for the guy. He gets bumped from his flight for a cardboard cutout, meets a cute nurse and thinks he’ll get to spend six hours with her only to be forced onto a cargo plane, has to hitch a ride in a jeep only to be kicked out for G.I.s and finally returns to the 4077th in horse-drawn cart.

Sure, he’s greeted with a hero’s welcome but is he allowed to take a shower or grab a bite to eat? No, it’s right to work. And to top things off, his office is so messy there’s a second mess under the first one.

Who knew Colonel Potter was such a MacGuyver and could build a Wangensteen suction out of odds and ends from the kitchen? You can read more about Owen Wangensteen and his suction here.

This episode also featured the last appearance of Johnny Haymer as Zelmo Zale, seen attempting to fix the generator under Klinger’s instruction.

I don’t know what to think about the main plot of the episode being about the 4077th searching for a new generator. Would the U.S. military really let one of its MASH units go without a generator? Would it really be up to the 4077th to find a replacement? We’re not talking about a movie projector or a basketball hoop. A generator is a vital part of the hospital.

Also, how would nobody have noticed that the backup generator was missing? Perhaps that is why Zale left the 4077th. Somebody had to take the fall for the generator disappearing.