Capsule Summary: Colonel Blake is going home and Hawkeye and Trapper decide to throw him a party to say goodbye.

This is perhaps the second most famous episode of M*A*S*H after the series finale. If by some chance you’re reading this and you haven’t seen “Abyssinia, Henry” and you don’t know what happens at the end, stop reading immediately and go watch the episode.

Everyone else, keep reading.

For those of us who didn’t watch “Abyssinia, Henry” when it originally aired in March 1975, it’s a pretty safe bet we had the episode spoiled for us, robbing us of the chance to react to the shocking twist ending. It’s unfortunate but that’s how these things go (who among us doesn’t know the twist ending to The Sixth Sense even if we haven’t seen the movie?).

Of course, as I discussed back in July 2011, there’s a chance viewers watching the episode in 1975 had also been spoiled thanks to various newspaper articles published as early as November 1974 that revealed Colonel Blake’s fate.

There are so many stories surrounding this episode that someone could write a whole book just about it. The controversy surrounding Henry’s death and the fact that both CBS and 20th Century-Fox were against it. The angry letters sent by irate viewers. McLean Stevenson’s reaction. The final scene having to be reshot due to some sort of issue with the first take. The rumored appearance by Stevenson on The Carol Burnett Show shortly after “Abyssinia, Henry” first aired.

As an episode, removed from its iconic status, “Abyssinia, Henry” works pretty well. I do feel the party scene lasts a little too long while Henry’s final review of the troops was too short (he says goodbye to one or two nurses by name but ignores the rest?). If it had ended with Henry getting on the chopper without Henry dying, it would have been a memorable farewell to the character. Henry never making it home, as so many during the Korean War never did, makes the episode unforgettable. 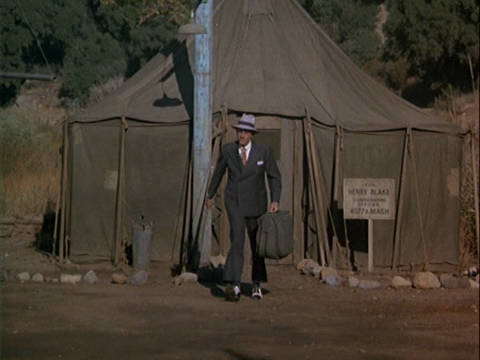 Henry Leaves His Tent for the Last Time

Henry, after determining when to call the States to tell his family he’s coming home, looks at a picture of his family and says to Radar, “Lorraine and the kids are going to die.” Foreshadowing or just a turn of phrase?

Poor Frank. Notice that when Margaret asks him if he doubts his ability, he makes a sound indicting he just might.

This episode takes place in 1952 and mentions the previous 4th of July.

Near the end of the episode, after Henry tells Radar to behave himself, Radar says something but there’s no audible dialogue. It looks like he’s saying “thank you.”

Aaccording to Larry Gelbart in the 1981 documentary “Making M*A*S*H,” during a rebroadcast of “Abyssinia, Henry” CBS cut out the final scene. I’ve never been able to confirm that. Anyone remember watching it without Radar’s announcement that Henry had been killed?