As M*A*S*H fans know, this was the last episode of the series that Larry Gelbart worked on. It wasn’t written the way regular episodes of television shows are written. It doesn’t feature any sort of plot or storylines. It is a masterpiece and one of the best episodes of M*A*S*H.

And yet, there’s very little I have to say about the episode. It’s too bad that Loretta Swit wasn’t in the episode because Margaret’s thoughts on the war would have been interesting to hear. As the story goes, “The Interview” was an extra episode ordered by CBS at the last minute and Swit had already been given permission to do a play in New York City. She was also absent from a few other late Season Four episodes.

Father Mulcahy and Colonel Potter are the best of the interviewees, in my opinion. Mulcahy’s story about the doctor’s warming themselves on the steam rising from the bodies of patients is the highlight of the episode. Hawkeye doesn’t come across that well due to the constant joking while Radar suffers from being slightly too immature to be realistic. Surprisingly, Frank manages to keep his crazy in check. 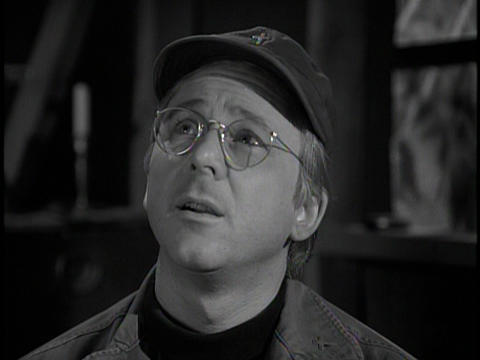 I wonder how much footage was shot for “The Interview” and not used. Reportedly there was some improvisation on the part of the cast. During the last scene of the episode there are a few lines spoken in voiceover that I don’t believe appear earlier in the episode. Perhaps there were entire scenes that didn’t make the final cut.

The sequel to this episode, the hour-long “Our Finest Hour” from Season Seven, wasn’t quite as a good.

In February 2006, Larry Gelbart wrote brief “The Interview” interviews for Henry, Trapper and Colonel Flagg and posted them to the alt.tv.mash Usenet group:

As mentioned earlier, Margaret does not appear in this episode.

24 Replies to “Episode Spotlight: The Interview”