Capsule Summary: Hawkeye and B.J. try everything to get a special clamp built while Margaret desperately searches for her missing wedding ring.

This episode had two storylines, one of which I liked and one of which I didn’t. The A story, in which Hawkeye and B.J. went to great lengths to design a special clamp that is sensitive enough not to crush arteries, is the one I liked.

It reminded me a little of earlier episodes like “The Incubator” in which Hawkeye & Co. butt up against the bureaucracy of the military while trying to find ways to save lives.

Charles, of course, was probably correctly when he stated that the Corps of Engineers had no business trying to build a clamp. And he was certainly right when he said that none of the doctors had the skills necessary to build it. He didn’t have to be as snotty about but he wouldn’t be Charles without his holier-than-thou attitude.

Poor Zale. He offered to try to build the clamp, perhaps overselling his skills somewhat in the process, and all he got for his efforts was yelled at. At the very least Hawkeye and B.J. could have said thanks for trying, sorry it didn’t work out. Or maybe give him thoughts so he could try again. 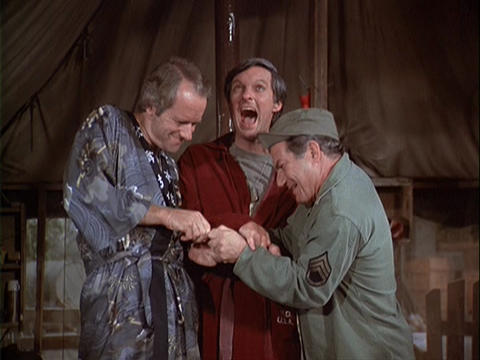 The B story involving Margaret’s lost wedding ring didn’t work as well for me. I think what bothered me the most was the fact that she never apologized to Klinger. Yes, he threw out her wedding ring but realistically she shouldn’t have left it on a shelf.

She eventually acknowledged that Hawkeye had done a nice thing by purchasing the replacement ring (ignoring entirely B.J.’s role) but we never saw her talking to Klinger about the fact that he dug through tons of garbage and lit his nose on fire trying to recover the original.

(We also never got to see her upset about the fact that the her original ring was apparently worth just $10.)

The vascular clamp was referred to in “Comrades In Arms, Part II” which although produced before “Patent 4077” actually aired after it, resulting in a rare continuity error for the series.

Radar does not appear in this episode. It was directed by Harry Morgan, which explains why Colonel Potter is barely in the episode.