Capsule Summary: Temporarily assigned to Battalion Aid, replacing a surgeon killed by a mortar, Hawkeye begins to write his will and reminisces about his friends at the 4077th.

This was a rare episode of M*A*S*H that utilized flashbacks, which allowed Hawkeye to remember good times spent with his friends at the 4077th as he sat huddled under a desk at Battalion Aid, listening to the shells explode around him.

Thoughts on the five flashbacks:

Charles – Exactly how did Hawkeye and the others manage to get the skirt (or was it a dress) on to Charles?

Father Mulcahy – Hawkeye certainly doesn’t come off well in this recollection, but Father Mulcahy does. But exactly what did he accomplish? The general may not have been able to finish his pheasant, but his Baked Alaska was still being baked.

Margaret – The jokes aren’t that great but Hawkeye is right about Margaret’s seldom seen silly side.

Colonel Potter – Said to take place only seven days after Potter transferred to the 4077th, this is a wonderful moment between the two characters.

Klinger – Another wonderful moment showing the kinder side of latter series Klinger, not the dress-wearing, Section 8-chasing Klinger of earlier seasons.

What should we, the viewers, make of Hawkeye not mentioning Trapper or Radar in his will? Or any family members other than his father?

When Hawkeye first crawls under the desk at the Battalion Aid station, there’s a small flame in the heater that quickly goes it. It’s a nice touch of realism. 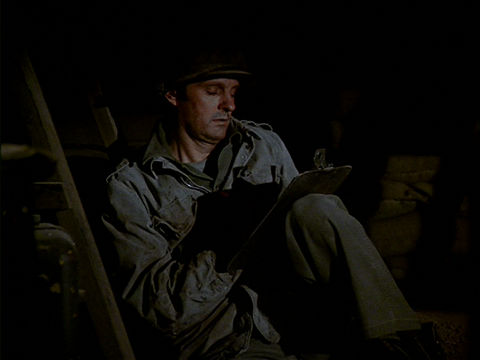 Hawkeye Writes His Will

I wonder, was the photograph of Erin and Peg Hunnicut actually a photograph of Mike Farrell’s daughter Erin and his then-wife (and occasional M*A*S*H guest star) Judy Farrell.

I may not know much about chess but I’m pretty sure the Yankakovich strategy isn’t real.

I wonder what Alan Alda was actually writing on the pad of paper when Hawkeye was supposedly writing his will?

Can anyone make out the cover to the issue of LIFE magazine? Was there really an article about Maine or was it something the prop department whipped up?

22 Replies to “Episode Spotlight: Where There’s a Will, There’s a War”