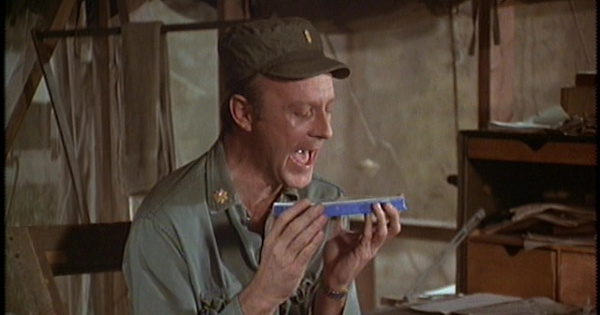 Capsule Summary: Bored out of their minds, Hawkeye and B.J. become obsessed with a newspaper crossword puzzle. They call an old friend of Hawkeye’s for help and due to a misunderstanding, he thinks there’s an emergency at the 4077th and shows up with an admiral in tow.

Maybe it’s just me, but while rewatching this episode I realized that I liked Frank’s B-story better than the Hawkeye and B.J.’s A-story. For some reason I just find his childlike glee while playing his Ball-in-the-Hole game, received as a present from a former receptionist, hilarious.

We never get to see the game, which has a picture of a scantily-clad and 15 holes for the BBs. Margaret refers to it as a pornographic. The conversation between Margaret and Frank is the highlight of the episode:

Frank: “Well a man has to have something. I’m very lonely, Margaret.”
Margaret: “You deserve to be. Look at that skimpy outfit she’s wearing.”
Frank: “I could buy you one just like it.”
Margaret: “How would you like that game jammed in your ear?”
Frank: “Oh, don’t make me nervous, Margaret. I’ll shake my B.B.s loose.”
Margaret: “It’s too late, Frank.”

Klinger’s C-story about trying to eat an entire jeep piece by piece is also a good one. Too bad there was no mention made of Radar’s attempt to mail a jeep back to the United States (in Season One’s “Dear Dad”). I wonder what Jamie Farr was actually eating when Klinger was supposedly swallowing nuts and bolts.

And that brings us back to the A-story and the crossword puzzle. It is certainly believable that Hawkeye would become obsessed with completing a crossword puzzle, going as far as to reach out to an old friend to try to come up with the last word to finish the puzzle.

I think what bothers me is the idea that Lt. Brooks would spend an entire day traveling from their aircraft carrier — which meant walking ten miles, among other things — just because Radar called and left a message that Hawkeye needed his help “real bad.”

We know Brooks called the 4077th before leaving, because he left a message, presumably with Radar. That means Radar is responsible for misunderstanding, a shocking bit of incompetence on his part. He could have simply asked Brooks about the crossword puzzle on the phone. Instead, he apparently forgot that was the entire reason Hawkeye called.

The admiral deciding not to order an investigation after participating in a seven-hour surgery is convenient and repetitive. Just about angry general or admiral ultimately gives Hawkeye a pass after seeing the 4077th in action.

This concept was revisited somewhat in Season Six’s “The Light That Failed,” which featured members of the 4077th obsessed with a mystery novel and going to great lengths to learn how it ended.

20 Replies to “Episode Spotlight: 38 Across”