Capsule Summary: Temporarily in charge of the 4077th, Frank accuses Hawkeye and Trapper of being alcoholics and declares the camp dry. Things don’t go quite as he had planned.

Here’s another episode that really has only one story line: Frank outlawing alcohol at the 4077th. The bulk of the episode revolved around Hawkeye and Trapper reacting to the loss of booze but Margaret and Father Mulcahy had something to do as well. Klinger and Radar had very little involvement in the episode and Colonel Blake, of course, was absent entirely.

Were Hawkeye and Trapper (and later B.J.) alcoholics or borderline alcoholics? With one or two exceptions, their drinking was never shown to interfere with their ability to operate. They drank often but weren’t constantly drunk. The bulk of their heavy drinking took place off-duty.

One could argue that with the possibility of wounding arriving unexpectedly at any time, they should never have gotten drunk at all.

For once, Frank actually seemed to have the best interests of Hawkeye and Trapper in mind, even if he wasn’t actually concerned about them. They certainly failed the test he gave them and, deprived of their still, began to come apart at the seams.

I’m not sure what to make of Margaret’s confession that she too drinks to deal with her nerves, explaining that she sometimes can’t make it without drinking. Yes, she was seen drinking on more than one occasion but not nearly as much as Hawkeye and Trapper/B.J. and usually when she did drink, she got really drunk.

Would one drink really have led to Father Mulcahy giving his anti-drinking sermon drunk? 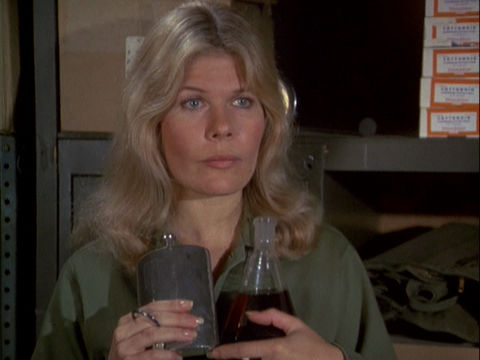 Margaret and Her “Medicine”

Frank walking outside wearing Margaret’s bra was amusing. I can’t decide whether seeing his reaction upon realizing he was wearing the bra while talking to Radar would make the scene more or less amusing.

I wonder if the shot of the film projector exploding was done just once or if it required multiple takes.

The movie the camp is watching at the start of the episode is Tin Pan Alley from 1940. The woman singing is actress Alice Faye and the man playing the piano is actor John Payne. And the song being sung is “America, I Love You,” originally written in 1915.