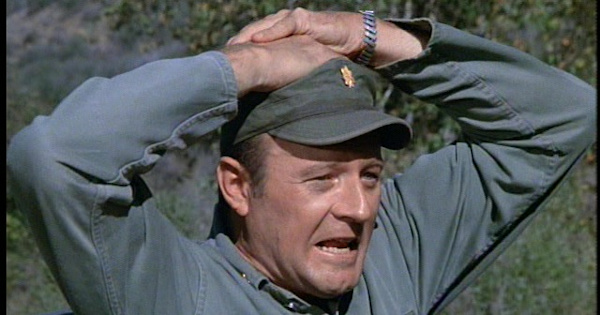 Capsule Summary: Hawkeye and B.J. plot to have a friendly North Korean surgeon assigned to the 4077th.

In many ways, this episode felt like it belonged in the first three seasons, when Hawkeye and Trapper were so often plotting against Frank and Margaret who in turn were suspicious of and spying on Hawkeye and Trapper. There’s not a lot of humor in the episode aside from Frank’s almost abduction by North Koreans. And it completely glossed over what could have made for an incredibly interesting episode.

What struck me the most was how nobody seemed to care why or how Dr. Syn Paik, who attended medical school in Chicago, ended up serving as a surgeon in the North Korean army. We don’t even know if he was born in North Korea or the United States. If he was born in North Korea, presumably he traveled to the United States prior to the outbreak of the Korean War and returned before the war broke out. He was probably drafted and had no option but to serve.

But if he was born in the United States or immigrated there from North Korea, that would mean he would have had to intentionally travel back to North Korea to serve in the war. Paik has an accent, although not a thick one, and he specifically states “I’m a surgeon. University of Chicago.” He doesn’t say he was a surgeon. He says he is a surgeon, as if he was still employed by the University of Chicago.

Admittedly, I may be spending too much time analyzing Paik’s character. But I think if it had been revealed that Paik had voluntarily left the United States to serve in the North Korean army, it could have changed the entire episode. Not only would Frank and Margaret have considered him the enemy but they would have called him a traitor as well, even if he hadn’t been an American citizen.

Time and again episodes of M*A*S*H drove home the point that the doctors of the 4077th saved lives regardless of which side of the war the wounded were from. Hawkeye and the other doctors did everything they could to repair soldiers and send them back out to kill. Forcing them to come face to face with an enemy doctor who did the same thing could have raised some very tough emotional questions.

That probably would have been a lot to ask of M*A*S*H. But thinking about what could have been leaves me feeling like this episode was just kind of bland. Yes, it showed Frank to be the racist, narrow-minded buffoon he was but it didn’t cover any new ground.

Plus, it is hard to believe that even Hawkeye would suggest trying to get a North Korean surgeon assigned to the 4077th. It is completely unbelievable that Radar and Sparky could actually get it done. And it is a great injustice to Colonel Potter as well as Frank and Margaret to suggest that simply shaving Paik’s goatee was enough to disguise him.

I also wondered why Paik would bother telling Radar and Klinger that the soldiers they were helping were North Koreans? If he thought they were so dangerous and that the best way to deal with them was to give them what they wanted, why not just keep quiet and let that happen? Why risk Radar or Klinger getting scared or flustered and tipping off the North Koreans that they’d been discovered?