Capsule Summary: Charles, charged with collecting money for charity, passes the responsibility, and it continues to be passed around camp. Meanwhile, a G.I. comes face to face with the North Korean soldier he shot.

The third-to-last episode of M*A*S*H, “Give and Take” featured two storylines. The A-story involves Charles trying to shirk his duties as charity officer while the B-story sees a wounded soldier, Private Kurland (played by Craig Wasson), coming to terms with the fact that the North Korean soldier he shot is a human being just like him. It is interesting that the B-story is the more serious of the two and I suppose for that reason you could argue it was actually the main storyline, although I believe the charity officer storyline got more screen time.

I wonder if the A-story was scripted intentionally to give all the main characters a bit to do as the series was coming to a close. With the charity officer gig passing from character to character, we got to see once again the temperament and thought processes of them all. Charles of course wants nothing to do with begging for donations, nice guy B.J. agrees to try his hand at it, Hawkeye attempts to seduce a nurse into donating, etc. Learning at the end that Charles donated all the money himself actually fit the character, who wasn’t as mean as he made himself out to be and had a very deep sense of self-preservation. 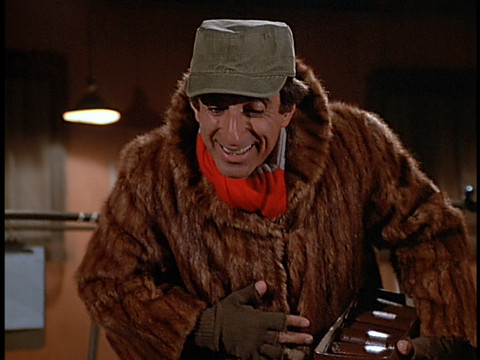 As for the B-story, although definitely heavy-handed, I think it works pretty well on the strength of Craig Wasson, who did a fantastic job portraying a man forced to come to grips with the reality that he has killed another human being rather than a nameless, faceless soldier. His conversation with Colonel Potter near the end of the episode about the North Korean soldier (“he was just a guy like me) is intense.

This episode features an anachronism: the candy bars Klinger hands out had Universal Product Codes (UPCs) on them. These were not introduced in the United States until the 1970s. Speaking of Klinger, why was he wearing his fur coat in this episode?

Igor explaining to B.J. about how he lost all his money to Rizzo in a poker game may have been the most lines the character had in a single episode.

9 Replies to “Episode Spotlight: Give and Take”