Ever wonder why “Divided We Stand,” the Season Two premiere, feels like a premiere episode for a new show rather than the season premiere for a returning series? Because in many ways it was an attempt at a new premiere episode. And here’s the proof: a two page press release announcing M*A*S*H‘s upcoming move to Saturdays at 8:30PM for the 1973-1974 season, currently listed on eBay for $14.95 with free shipping. I often browse eBay looking for interesting M*A*S*H items and I came across this press release the other night (I have no connection to the seller). 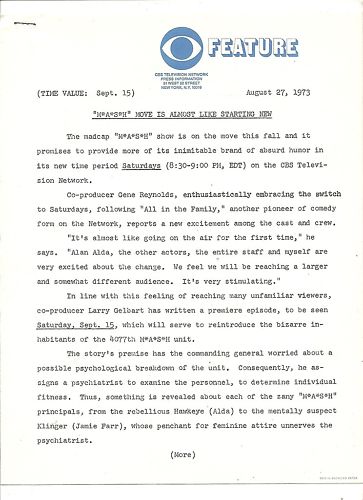 Only the first page was scanned for the eBay listing and it is a little small so I’ve transcribed it:

The madcap “M*A*SH*” show is on the move this fall and it promises to provide more of its inimitable brand of absurd humor in its new time period Saturdays (8:30-9:00 PM, EDT) on the CBS Television Network.

Co-producer Gene Reynolds, enthusiastically embracing the switch to Saturdays, following “All in the Family,” another pioneer of comedy form on the Network, reports a new excitement among the cast and crew.

“It’s almost like going on the air for the first time,” he says. “Alan Alda, the other actors, the entire staff and myself are very excited about the change. We feel we will be reaching a larger and somewhat different audience. It’s very stimulating.”

In line with this feeling of reaching many unfamiliar viewers, co-producer Larry Gelbart has written a premiere episode, to be seen Saturday, Sept. 15, which will serve to reintroduce the bizarre inhabitants of the 4077th M*A*S*H unit.

The story’s premise has the commanding general worried about a possible psychological breakdown of the unit. Consequently, he assigns a psychiatrist to examine the personnel, to determine individual fitness. Thus, something is revealed about each of the zany “M*A*S*H” principals, from the rebellious Hawkeye (Alda) to the mentally suspect Klinger (Jamie Farr), whose penchant for feminine attire unnerves the psychiatrist.

7 Replies to “Press Release for 1973 Move to Saturdays”