Thanks to David Goehner at the for bringing this to my attention.

This past Tuesday (June 16th), a teddy bear made by Larry Linville sold for $108.88 on eBay. The listing, which will be removed in approximately 30 days, can be found here. Also included was an autographed photograph of Linville with the inscription “Bears to You! Larry Linville.” 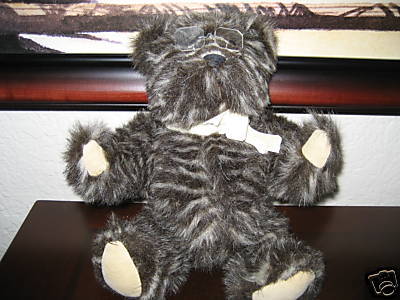 Teddy Bear Made by Larry Linville

What a special bear! This little guy was handmade by Larry Linville. My Mother went to his home a bought this cute bear. He is fully jointed and has glasses on his nose. His fur is black and gray and has a irovy ribbon around his neck. This bear has what looks like leather paw pads and is 12″ tall. He has a label on his back seam that says ” Larry Linville”. The bear has tiny ears and has a full body. He can sit or stand. I think my Mom purchased him in the 80’s. Most of her huge bear collection was from that time. I think Larry Linville took up sewing bears after the MASH show. My Mom said he was a very nice man and they had fun talking about teddy bears.

A February 26th, 1983 Associated Press article discussing the end of M*A*S*H noted that Larry Linville had started making teddy bears because his sister-in-law ran a teddy bear store called Grin ‘n’ Bear It. Said Linville, “It started out as a joke and now I’m up to my butt in cloth, stuffing and bears. My wife dared me to make a bear and, after six or seven disasters, I came up with a decent-looking bear. They’re cute as hell and we’ve sold lots of them. Making the things is good therapy in between acting roles” [1]. 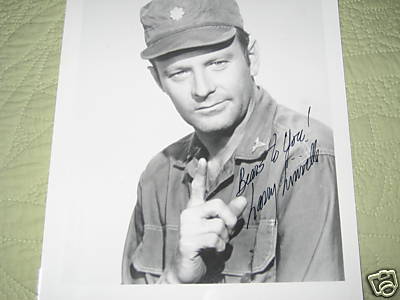 Another article, this one in published in Newsweek on December 24th, 1984, reported that the sister-in-law owned a chain of stores called Bear ‘N Grin It (as opposed to Grin ‘N Bear It), in which Linville’s bears were sold. The article also revealed that Linville’s childhood bear, named Ignatz, had been lost during a move [2].