Now this is an interesting bit of M*A*S*H history I came across on eBay the other day. Someone was selling a board game put together by Alan Alda and his wife, Arlene, in December of 1973 as a Christmas gift for Perry Lafferty. Lafferty, who died in August of 2005 at the age of 87, was a CBS executive during the 1970s and was heavily involved in building the network’s fall schedules. He helped get M*A*S*H, The Waltons and All in the Family on the air (among many other shows). Here‘s a obituary for Perry Lafferty from The Boston Globe.

The seller told me that the game was pulled out of the trash. It may be a one-of-a-kind item, although that didn’t help it find a buyer. Perhaps Alan and Arlene Alda put together several sets for CBS executives as a Thank You for supporting the series. Who knows.

The game itself is simply a piece of paper glued to a chess/checkers board with game pieces made out of wood with pictures of the cast glued on them. There are also two sets of cards, “Off Duty” and “Choppers,” that give instructions for players to follow, plus markers with the Red Cross emblem for keeping score, and a pair of dice. 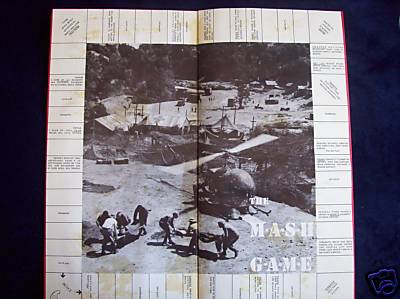 Here are the rules, transcribed from a sheet that used to be attached to the box cover:

1) The object of The M*A*S*H G*A*M*E is to save as many lives as you can, especially your own.

2) The game is over when the first player get to Peace.

3) The winner is the player who has saved the most lives during the game. So, the more you operate the better.

3) Move (in the direction of arrow) the number of spaces indicated by a throw of the dice. Follow the directions in each space you land on.

1) “Choppers!” means that choppers have landed with wounded. Take a Choppers card.

3) In all spaces and cards, the directions apply to the character whose name is underlined…and only when that character lands there. For instance, in “Hot Lips misses Frank”…Hot Lips goes back 2 spaces, not Frank, and only when Hot Lips lands in that space.

4) Replace cards at the bottom of their respective piles.

1) Take a Red Cross marker for every life you save in the game.

2) The player landing in Peace and ending the game doubles his or her Red Cross markers as a bounus for ending the War. If you have 5 markers when you end the game, you get 5 more.

3) The winner is not necessarily the player who finishes first–it is the player with the most Red Cross Markers.

1) At any time after you are drafted you can attempt to survive by acting crazy.

2) To signify you have decided to act crazy, stand your character on it’s head.

3) Acting crazy gives you the option of moving forward or backward. Players not acting crazy may only move forward.

4) When acting crazy, you may only roll one die. What you make up in mobility, you lose in speed.

At any time in the game a player can decide to take a 3 day pass, which he or she skips the next three turns at the dice.

When player gets back to camp on the fourth turn, player goes directly to surgery and saves two lives.

You can not be sent to the swamp or showers while on a pass.

1) The game is ended when a player moves forward into Peace.

a) The character must move into Peace right side up (not acting crazy) and,

b) The character must land on Peace by exact count.

2) If the count is not exact, player stands in place until next turn.

Here are some other pictures: 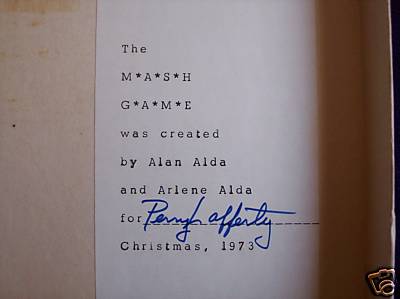 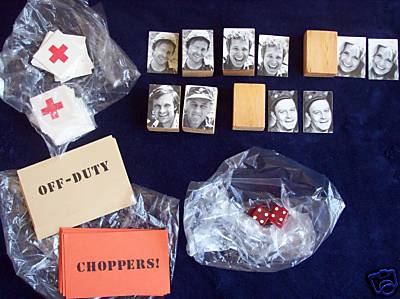 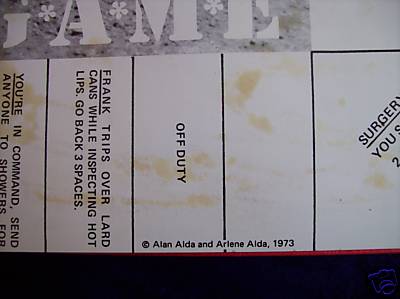 I wonder if Perry Lafferty ever played the M*A*S*H G*A*M*E and, if so, did he win?