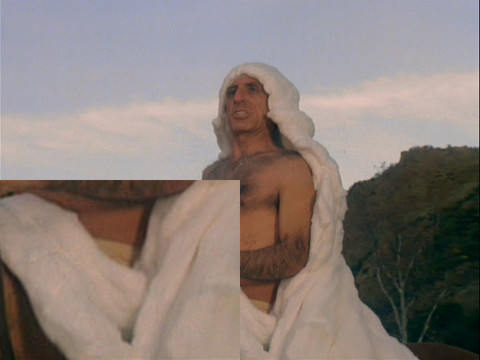 Near the end of “Your Retention Please,” after signing up for another six years in the Army while depressed, Klinger attempts something drastic to convince Colonel Potter he’s nuts. While the whole camp is assembled he does his best Lady Godiva impression, arriving on Sophie wearing nothing but a white robe:

Charles: “Good grief? What is this disgusting spectacle?”
Father Mulcahy: “It’s Klinger on Sophie. And they’re both naked.”

But Klinger (and thus Jamie Farr as well) wasn’t naked, as this image proves:

This is a particularly egregious production error–it’s very obvious Klinger isn’t naked under his robe.

One Reply to “Klinger’s Not Naked (“Your Retention Please”)”