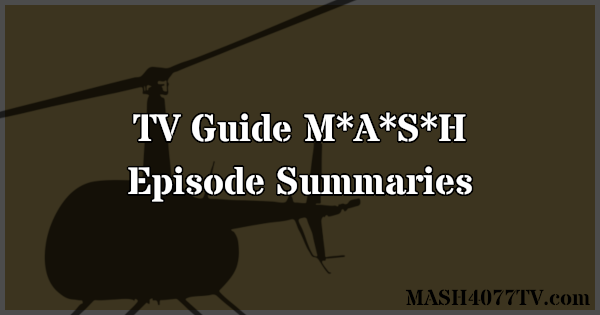 Between 1972 and 1983, TV Guide published short summaries for nearly every new episode of M*A*S*H on CBS as well as most repeats. These summaries were one or two lines and occasionally included information on a guest star.

Below you’ll find TV Guide summaries for most of Seasons 2 through 4. Some of the summaries are missing and I’ve noted which summaries were taken from repeats.

I plan to add more summaries in the near future.

02×04 “For the Good of the Outfit”
Saturday, October 6th, 1973
Hawkeye and Trapper John run into high-level flak as they try to report a U.S. artillery barrage that hit friendly South Koreans.
[Summary from the March 30th, 1974 repeat.]

02×05 “Dr. Pierce and Mr. Hyde”
Saturday, October 13th, 1973
Hawkeye has been operating so long he just can’t quit-and no one can stop him. Alan Alda, who plays the haggard Hawkeye, coauthored the script.
[Summary from the May 4th, 1974 repeat.]

02×06 “Kim”
Saturday, October 20th, 1973
Maternal feelings blossom like flowers in spring with the appearance of Kim, a wounded and apparently orphaned Korean boy whom everyone wants to mother.
[Summary from the April 6th, 1974 repeat.]

02×10 “The Sniper”
Saturday, November 17th, 1973
Predictable panic erupts at MASH as a lone enemy sniper turns the hospital compound into a combat zone.
[Summary from the April 13th, 1974 repeat.]

02×12 “The Incubator”
Saturday, December 1st, 1973
Taking the time-honored route of going through channels, Hawkeye and Trapper John discover that it might be easier to win the war than to obtain a vitally needed piece of medical equipment.
[Summary from the May 11th, 1974 repeat.]

02×14 “Hot Lips and Empty Arms”
Saturday, December 15th, 973
Hot Lips is rebelling. Fed up with just about everything, she’s ready to end her romance with Frank and transfer out of MASH.

2×16 “Henry in Love”
Saturday, January 5th, 1974
If Henry’s feet seem to be planted firmly in the clouds, it’s because he’s returned from Tokyo heels over head in love -with a girl just half the age of his wife. Kathy Bateman plays the youngster who has Henry running for the hair dye.

2×17 “For Want of a Boot
Saturday, January 12th, 1974
All Hawkeye wants is a pair of boots, but first comes this game of musical favors: the supply sergeant wants a dental appointment, the dentist wants a three-day pass to Japan … and on … and on.

2×18 “Operation Noselift”
Saturday, January 19th, 1974
“Operation Noselift,” or how to get a prohibited plastic surgery for a private with a prominent proboscis. Stuart Margolin plays the specialist imported for the job.

2×19 “The Chosen People”
Saturday, January 26th, 1974
Now it’s the Korean nationals who are giving Henry the hives. A local farmer is demanding that MASH get off his land, and a peasant girl is claiming that a G.I. doctor fathered her child.

2×20 “As You Were”
Saturday, Febraury 2nd, 1974
Frank chooses a lull in the action for his hernia operation, and that’s just when the war resumes full tilt.

2×21 “Crisis”
Saturday, February 9th, 1974
A cut supply line creates a crisis at MASH. They’re running out of everything but casualties.

2×22 “George”
Saturday, February 16th, 1974
Once again Frank is in high dudgeon, this time over a homosexual patient he thinks should be drummed out of the Army.

3×01 “The General Flipped at Dawn”
Tuesday, September 10th, 1974
The Emmy-winning MASH team opens a third season with a madcap reception for a spit-and-polish general, played by Harry Morgan.

3×02 “Rainbow Bridge”
Tuesday, September 17th, 1974
A surprising offer by the Red Chinese puts a crimp in Hawkeye and Trapper’s plan for a three-day leave in Tokyo.

3×03 “Officer of the Day”
Tuesday, September 24th, 1974
As officer of the day, Hawkeye is bedeviled with a host of improbable problems. The most galling stems from an overzealous intelligence officer (Edward Winter reprises his role from last season) who wants a wounded prisoner patched up for execution.

03×05 “O.R.”
Tuesday, October 8th, 1974
This series’ first episode without a laugh track is also also its most serious to date. The action–set entirely in the operating room–concerns the skill and endurance of the 4077th as it treats and overwhelming number of battle casualties.

03×06 “Springtime”
Tuesday, October 15th, 1974
The onset of spring brings out the sap in everyone, especially in a patient (played by former Detroit Lion Alex Karras) who can’t thank Hawkeye enough for saving his life.

03×07 “Check-Up”
Tuesday, October 22nd, 1974
Trapper reacts with surprising hostility to an order requiring everyone to undergo a medical checkup.

03×08 “Life with Father”
Tuesday, October 29th, 1974
Honoring a G.I.’s request for a traditional Jewish religious ceremony poses a problem in a unit where the only chaplain is Catholic.

03×10 “There Is Nothing Like a Nurse”
Tuesday, November 19th, 1974
The men’s morale plummets when the threat of an enemy parachute drop forces evacuation of all the nurses.

03×11 “Adam’s Rib”
Tuesday, November 26th, 1974
A craving for barbecued spareribs is driving Hawkeye crazy. But the only ribs he wants are from a restaurant in Chicago.

03×12 “A Full Rich Day”
Tuesday, December 3rd, 1974
A berserk Turk, a missing corpse and a menacing lieutenant are the main contributors to what Trapper calls a well-rounded day of insanity.

03×13 “Mad Dogs and Servicemen”
Tuesday, December 10th, 1974
While Henry looks for the possibly rabid pooch that bit Radar, Hawkeye raises eyebrows with his heartless treatment of a paralysis case.
[Summary for the June 17th, 1975 repeat.]

Courage and humor are literally tested under fire as the 4077th is caught in a heavy artillery barrage.
[Summary for the August 26th, 1975 repeat.]

03×16 “Bulletin Board”
Tuesday, January 14th, 1975
It’s one of those days when absolutely nothing comes off as planned, from Henry’s lecture on sex to the company picnic. Directed by Alan Alda (Hawkeye).
[Summary for the August 5th, 1975 repeat.]

03×17 “The Consultant”
Tuesday, January 21st, 1975
In Tokyo, an expert on new surgical techniques is challenged by the surgeons to visit the 4077th and “really get into the game.” Robert Alda, father of Alan (Hawkeye), plays the medical consultant.

03×21 “Big Mac”
Tuesday, February 25th, 1975
With the predictable exception of Hawkeye and Trapper, the personnel at MASH work themselves into a tizzy over the impending visit of Gen. Douglas MacArthur.
[Summary for the August 19th, 1975 repeat.]

03×23 “White Gold”
Tuesday, March 11th, 1975
A theft of penicillin prompts an immediate visit by Colonel Flagg, a masochist CIA agent who would give his life to break up the penicillin ring.

03×24 “Abyssinia, Henry”
Tuesday, March 18th, 1975
It’s a red-letter day for the 4077th when Henry (McLean Stevenson) gets the news that he has been discharged. Sentimental moments mix with bon-voyage hoopla as the C.O. prepares to take his leave, and Frank (Larry Linville) prepares to take command.
Directed by series creator Larry Gelbart.

“Change of Command”
Friday, September 19th, 1975
Command of the 4077th is assumed by Col. Sherman Potter, a regular Army man who is about to learn that life at the 4077th is anything but regular.
[Summary for the March 9th, 1976 repeat.]

“It Happened One Night”
Friday, September 26th, 1975
Through a long and freezing night, doctors and patients alike are rattled by the continual roar of friendly fire.

“The Late Captain Pierce”
Friday, October 3rd, 1975
No one rests in peace after the Army officially, if prematurely, lists Hawkeye as dead.

“Hey, Doc”
Friday, October 10th, 1975
Hit by an epidemic of requests for special favors, the doctors do unto others as they would have others do unto them.

“The Bus”
Friday, October 17th, 1975
Stranded on an unfamiliar road by the breakdown of their bus, the men are out of contact with the base, out of provisions and nearly out of their minds: they are lost in what may be enemy-held territory.

“The Kids”
Friday, October 31st, 1975
With the predictable exception of self-centered Frank Burns the MASH personnel open their hearts and tents to a refugee band of Korean orphans.

“Quo Vadis, Captain Chandler”
Friday, November 7th, 1975
A patient’s insistence that he is really Jesus Christ prompts immediate visits by a hard-nose CIA agent and a compassionate psychiatrist (Edward Winter and Allan Arbus in recurring roles).
[Summary for the May 4th, 1976 repeat.]

“Dear Peggy”
Tuesday, November 11th, 1975
In a letter to his wife, B.J. details a wide variety of newsy and nutty happenings at MASH. Included is an inspection by a taskmaster chaplain (played by Ned Beatty). [Pre-empts “Joe and Sons.”]

“Of Moose and Men”
Friday, November 21st, 1975
While Hawkeye finds a unique way to make amends for splattering mud on an unforgiving artillery colonel, B.J. consoles a furious sergeant whose wife strayed from the fold and now wants back.

“Soldier of the Month”
Friday, November 28th, 1975
To boost morale during a fever epidemic, Colonel Potter announces a Soldier-of-the-Month contest that will send the lucky winner on a six-day leave to Tokyo. [Last day in this time period. “M*A*S*H” moves to Tuesday beginning Dec. 2.]

“Mail Call, Again”
Tuesday, December 9th, 1975
Letters from home spark a number of mini dramas, including Frank’s flight into frenzy because his wife found out about Hot Lips (Loretta Swit).

“The Price of Tomato Juice”
Tuesday, December 16th, 1975
To please Colonel Potter, Radar attempts to insure a steady supply of hard-to-obtain tomato juice–setting off a virtual chain reaction of favor-exchanging.
[Summary for the September 7th, 1976 repeat.]

“Dear Ma”
Tuesday, December 23rd, 1975
The 4077th’s monthly foot inspection is but one of several ticklish matters that Radar describes in a letter to his mother.

“Der Tag”
Tuesday, January 6th, 1976
Colonel Potter asks the near-impossible of his surgeons: to be nice to Frank, who is more disagreeable than ever now that Hot Lips is away at a seminar in Tokyo.

“Some 38th Parallels”
Tuesday, January 20th, 1976
Four separate stories are united by the common element of anxiety, ranging from Frank’s fear that the Koreans are stealing the 4077th’s garbage to a wounded colonel’s worry about retrieving the killed-in-action, no matter what the cost in lives.

“Smilin’ Jack”
Tuesday, February 3rd, 1976
Differing attitudes toward war are embodied by an ailing helicopter pilot who doesn’t want to quit and a two-time Purple Heart winner who definitely does.

“The More I See You”
Tuesday, February 10th, 1976
The only woman Hawkeye ever wanted to marry is assigned as a nurse to the 4077th, but now she is married to somebody else.

“Deluge”
Tuesday, February 17th, 1976
The 4077th’s personnel and facilities are suddenly taxed to the limit by a deluge of casualties from an unexpected enemy offensive.

“The Interview”
Tuesday, February 24th, 1976
Interviews with individual MASH personnel probe the private feelings of men caught up in a bloody, ambiguous conflict that lacks even an official declaration of war. TV newscaster Clete Roberts portrays the war correspondent. Filmed in black and white to simulate a ’50s documentary; the actors’ responses are largely improvised.