Loretta Swit, Jamie Farr, and Jeff Maxwell Will Be in My Town for a Convention

Talk about all things M*A*S*H -- the novel, the film, the television series, even the play. Not to mention the spin-offs, merchandise, cast, crew and anything else you can think of to talk about.
Post Reply
3 posts • Page 1 of 1

Loretta Swit, Jamie Farr, and Jeff Maxwell Will Be in My Town for a Convention

Originally, Loretta and Jamie were scheduled to be in my town for a local ComicCon back in 2020, but unfortunately, the early days of the COVID-19 pandemic put the kibosh on that.

However, now they along with Jeff Maxwell are scheduled for this year's convention later this summer in honor of M*A*S*H's 50th anniversary, and you can bet your brass I have every intention of attending and meeting them! After all, who among us would pass up such a rare and special opportunity as this?!

Usually at these cons, in addition to having their individual tables where you can meet and greet the guests, they also have a Q&A panel and a photo-op - for now, I know for certain there will be a photo-op, however I haven't seen anything about a panel yet - usually, they wait until a week or two prior to the actual event to have a full schedule of such things, but I am fairly certain there will be one, since again, their visit is in honor of the show's 50th anniversary.

I've finally started going to these cons in recent years, and after attending a few of them, I've come to learn that you can get into the panels for free, but everything else usually comes with a charge (and from what I'm seeing so far, a basic autograph from each of them is $50, which is approximately half of what Christopher Lloyd alone is apparently charging). My plans are this: definitely attend a panel and film it, meet each of them individually for an autograph and picture, but also pay for a group photo-op as well . . . to me, that would be the ultimate package for a big-time MASHer getting to meet three of the castmembers like this.

My only quibble is the time of year this year's con is being held . . . it varies year to year, but if it wasn't in the dead of summer this year, I would definitely do a full Radar O'Reilly cosplay, not just with fatigues, but also my olive drab 5-button sweater . . . but in August, that's out of the question for me. Depending on what the weather is like that weekend, if it's really, really hot and humid over 90 degrees, a Hawaiian shirt is in order, but if it's below 90, I suppose I could wear any number of my M*A*S*H t-shirts. Either way though, as you guys can probably predict, I'll still be wearing my not-so-trademarked Radar cap of course.

I'll definitely keep you guys posted on my experience and share everything that I can with you.
Top

Re: Loretta Swit, Jamie Farr, and Jeff Maxwell Will Be in My Town for a Convention

Cant wait for the pics and video B-Daddy
Top

Re: Loretta Swit, Jamie Farr, and Jeff Maxwell Will Be in My Town for a Convention

Well, the entire experience turned out to be a rather disappointing one, I have to say.

Just days before the con, Jeff Maxwell had canceled because of an unspecified health emergecy - not sure what that's about, but hopefully he is and will be okay. Then the day of, Loretta Swit was a no-show, as evidently, all flights from whatever she was had been canceled, so she was unable to attend.

That only left Jamie Farr, and even that wasn't particularly meaningful or spectacular. Don't get me wrong, it was still a thrill and an honor to meet him (when I approached his table, he saw me in my hat and t-shirt and said, "Ah, another Radar O'Reilly!"), and he was certainly a warm and friendly guy, but because of the line that was at his table, they kept up moving at a steady pace so as to not hold anybody else up, so there really wasn't much of an opportunity to actually get to stop and chat with him for a few minutes - and believe me, I had a few things I really wanted to say to him, not just about Klinger and M*A*S*H, but a couple of other talking points as well (I wanted to bring up the Doris Day movie in which he and William Christopher played the ringleaders of a hippy motorcycle gang, and mention how much I would have loved to have seen him on THE MUPPET SHOW).

He must have seen quite a number of people at the con, because by the time I reached his table, he was almost out of photos to autograph, but I had brought something of my own to have signed, which you guys have seen pictures of before - he was really impressed with it, and said he knew Loretta would've loved to sign it had she been able to make it. (FWIW, I was going to bring my copy of THE SECRETS OF THE M*A*S*H MESS for Jeff to sign had he been there).

So all in all, like I said, I'd be lying if I said the experience wasn't a trifle disappointing, but to remain positive and look on the bright side, I have something I can cross off my bucket list: I MET KLINGER!! 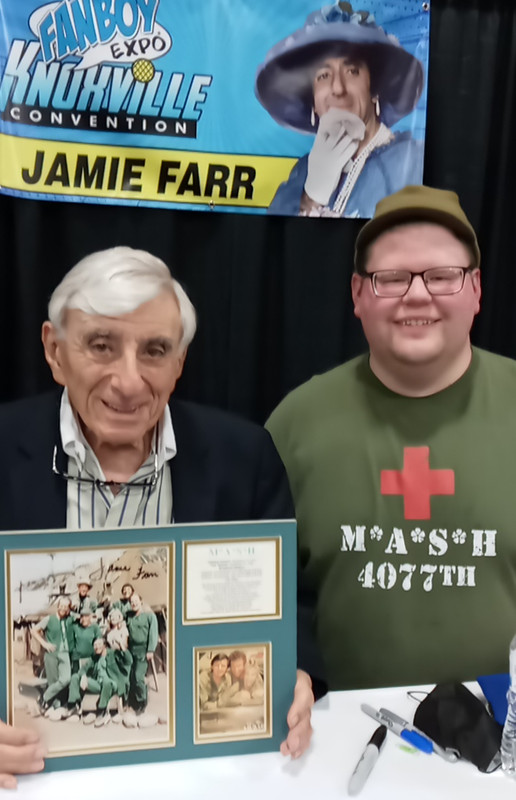