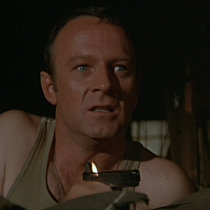 Capsule Summary: Hawkeye operates on an ungrateful colonel, B.J. tries to save Zale’s marriage, and and Frank worries about saboteurs.

“Of Moose and Men” was the third episode produced for Season 4 but it aired as the 11th episode. I suppose bland is a good way to describe it. There’s nothing wrong with the episode, I just don’t find any of the storylines all that interesting.

Because it was an early episode in the season, B.J. and Colonel Potter aren’t well developed. B.J. mentions his wife and marriage a few times while Potter discusses his military service. These are things the writers knew about the characters from the beginning, things that were at the core of the characters. Potter also says he’s one-fourth Cherokee, which I don’t believe was ever brought up again.

The Hawkeye/Colonel Spiker story goes nowhere, which could be the point. We’re introduced to a colonel who takes an instant dislike to Hawkeye and refuses to change his mind even after Hawkeye saves his life. Like Hawkeye, we as viewers have trouble understanding why Spiker can’t even say thank you. It’s clear Hawkeye is stunned by his conversation with Spiker so of course he resorts to humor and sarcasm.

The B.J./Zale story gives B.J. the opportunity to learn a little about life in Korea. He didn’t know what a “moose” was and, after finding out, can’t believe Zale is acting like such a hypocrite. I wonder what B.J. would’ve thought of Colonel Blake or Trapper, two married men who also cheated on their wives and didn’t see anything wrong with it. With Zale, B.J. uses some sarcasm to convince Zale to forgive his wife, but doesn’t act sanctimonious.

Finally, there’s Frank and his paranoia concerning hidden bombs at the 4077th. Not that Frank needs a reason to act crazy, but his obsession more or less comes out of nowhere. True, he and Hawkeye encounter Colonel Spiker and his men inspecting South Korean civilians, but why would that set him off? It’s always funny to see Frank go crazy–too bad he roped Radar into helping and later forced Igor and others help him search for a bomb that turned out to be a kimchi pot. 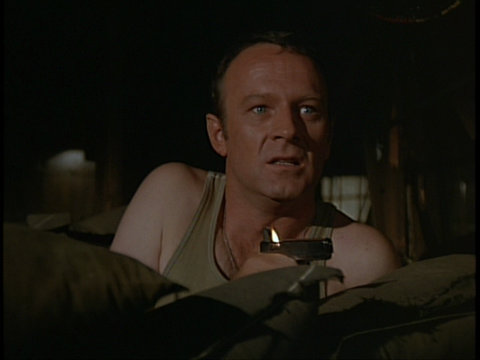 Frank has the fastest lighter in the west.

Despite having several lines, Lois Foraker isn’t credited for her role in this episode. She’s the nurse who tells Hawkeye that Colonel Spiker wants to talk to him. Foraker made three additional credited appearances on M*A*S*H and later had a recurring role on AfterMASH.

3 Replies to “Episode Spotlight: Of Moose and Men”