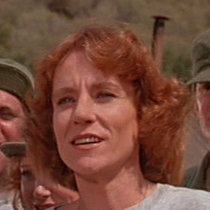 Actress Barbara Tarbuck, who guest starred in Season 11’s “Run for the Money,” died Tuesday (December 27th) at the age of 74. Her acting career began in the late 1970s with roles on TV shows like The Waltons, The Incredible Hulk, Charlie’s Angels, and Dallas.

In “Run for the Money,” Tarbuck played Major Judy Parker, the head nurse at the 8063rd MASH. Margaret did not get along with her counterpart at the 8063rd; according to her, sailors referred to Major Parker as “Parallel Parker” (which intrigued Hawkeye). Her feud with Parker led Margaret to put up a week’s pay after Klinger announced his plan to beat the 8063rd using a sprinter named Jessie McFarland.

Some of her other TV credits include Newhart, St. Elsewhere,Falcon Crest, Star Trek: The Next Generation, Crossing Jordan, NYPD Blue, and Glee. More recently, she had a recurring role on American Horror Story from 2012 to 2013. Her last credited role was in a 2015 movie called Come Simi.

Obituaries can be found at Legacy.com, Soaps.com, and Soap Central.